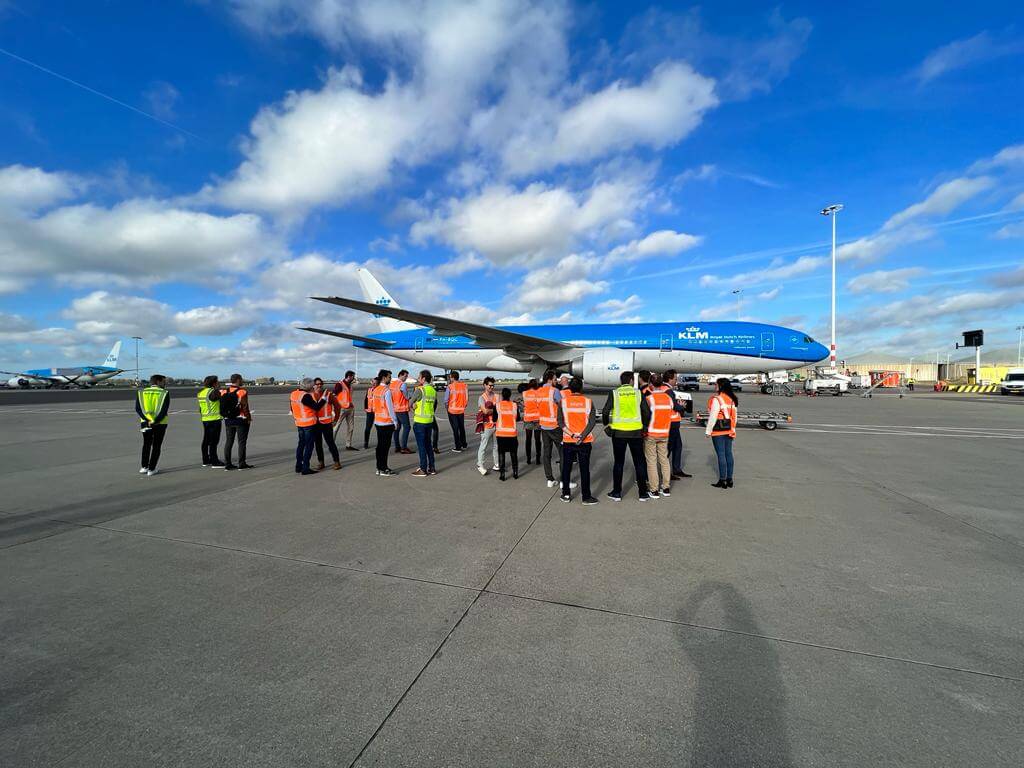 Schiphol is one of the leading international airports in the world, not just by passenger count, but also when it comes to digitization, automation and its vision in becoming an autonomous airport by 2050. To showcase what they are working on, Floris Hoogenboom (Head of AI) and his team, invited business leaders and AI professionals from the ai.nl community to the airport for inspiring talks and an airside visit.

The talks focussed on both the Turnaround Insights project, which helps to get detailed insights on the turnaround time of an airplane from the moment it arrives at the gate till it is ready for departure, as well as its innovations in AI-driven software to augment the knowledge of gate planners to make faster decisions in case of delays.

DeepTurn, as the Turnaround Insights project is branded, uses computer vision to analyze real-time video streams from two dedicated camera’s that are now installed at most of the gates. These analysis give then start and end time for each process during the turnaround – from the connection of the fuelling truck, the arrival of the catering trolley, on- and offloading of the luggage and much more.

This way it becomes possible to gain insight into all sub processes of a turnaround and analyse where any inefficiencies occur. As Schiphol and its affiliated airliners work with many parties for different processes, these insights are of key value in optimizing the collaboration of everyone involved in getting an aircraft ready for departure as efficiently as possible.

Where this used to be a black box, now the software can recognize patterns of frequent hiccups. This way it can predict up to 30 minutes in advance if an aircraft will most likely be delayed and why, as well as to help to pinpoint the reason for common disturbances in the process and tackle this issue in the future.

Also read: How Floris Hoogenboom and Schiphol are using artificial intelligence to make the airport autonomous by 2050

To augment the decision making process of gate planners is another use case of AI at Schiphol Airport. In case of a delay and an incoming flight that can’t use a certain gate – a gateplanner will need to take action to resolve this conflict, for example by moving the next flight to a different stand.

However, it is important to realize that such an action will come will all kinds of side effects. For example, moving this flight now might cause a ripple effect in the gateplanning itself later in the day (leading to even more adjustments). It might also influence for example the moment peaks arises at the arrival security filters.

The proprietary decision augmentation software Schiphol has developed helps with:

The software isn’t designed to make gate planners obsolete in the future, but rather to help them make faster and even more informed decisions.

At the ai.nl meetup at Royal Schiphol Group, various business leaders, investors and professionals from the AI industry, got a first hand look at these innovations and got to see in action how it works today, but also got insights into the ambitions for the future. As one attendee described it: “The route Schiphol is taking, will certainly make it the most intelligent airport in the world.”