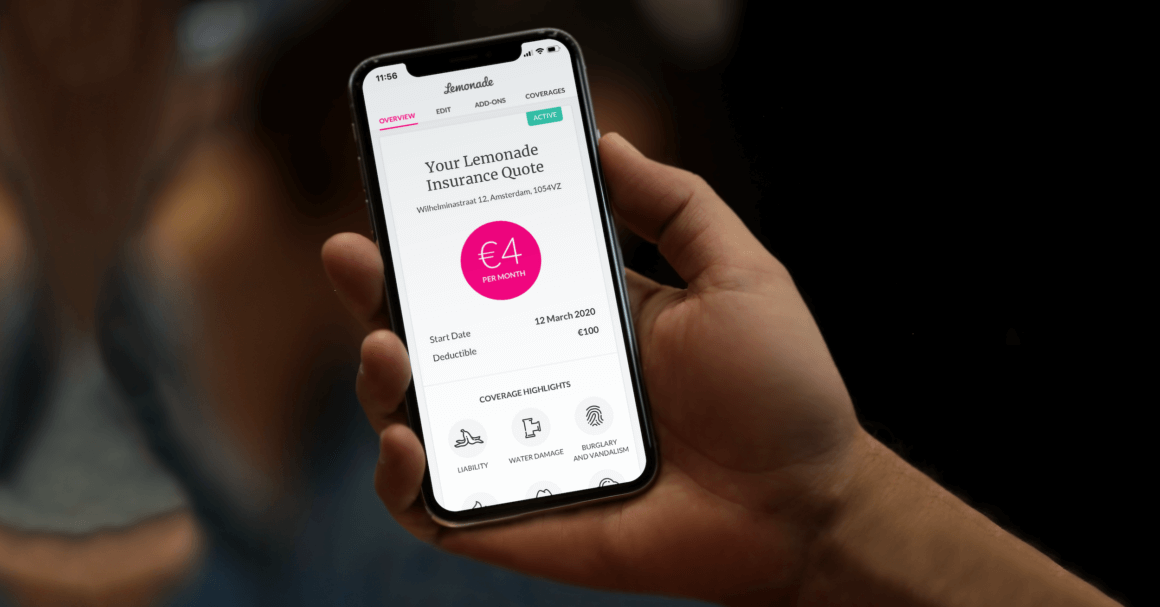 Lemonade wants to transform insurance into a social good: a look at Lemonade’s history, key members, and road to profitability

In this series of ai.nl, we feature the most promising AI companies in the world: where do they come from, what have they achieved and what are their plans for the future. In this episode, we are looking at Lemonade, a New York-based former startup that has completely changed the old school world of insurance with AI.

Founded by Daniel Schreiber (former president of Powermat Technologies) and Shai Wininger (co-founder of Fiverr) in April, 2015, Lemonade calls itself an insurance built for the 21st century. It offers renters insurance, homeowners insurance, car insurance, pet insurance, and term life insurance in the US. It has expanded to select European markets as well. The story of Lemonade is one of the completely disrupting the insurance industry.

Transforming insurance into a social good

Based in New York, Lemonade is registered as a public benefit corporation and has a stated mission of “transforming insurance from a necessary evil into a social good.” One of the things that Lemonade does differently is offering a portion of its underwriting profits to a nonprofit organisation chosen by each customer upon signup.

It has approximately 1 million customers and 70 per cent of its customers are under the age of 35. It offers a host of insurance services in the US and has expanded to France, the Netherlands, and Germany in Europe. It is offering a contents and liabilities policy in Germany and the Netherlands, while folks in France can get renters insurance from Lemonade.

The most interesting part of Lemonade is the use of artificial intelligence and chatbots to process claims. It has built a total of three AI chatbots named Maya, Jim, and CX.AI. It has built a Forensic Graph using AI and behavioural economics to predict, detect and block fraud.

What do Lemonade’s AI chatbots do?

The first chatbot from Lemonade is Maya, an intelligent virtual assistant capable of building the perfect insurance for Lemonade users. Maya does this by collecting information and providing users with a quote. The chatbot is even capable of handling the payment for its users.

The second chatbot is Jim and it is designed specifically to handle claims. In its IPO document, Lemonade claimed that Jim is able to handle roughly a third of the cases. It is remarkable to see a chatbot work with such efficiency. Lemonade says with Jim able to handle the initial claims process, the company is able to process the claims quicker even when it is handed to a human.

Lastly, Lemonade has a chatbot designed specifically for answering all the queries raised by its customers. The use of these three AI chatbots along with a Forensic Graph for fraud detection makes Lemonade a full-stack insurance provider with AI at the core of its service.

Is Lemonade’s destiny to become the biggest insurance company?

It has been two decades since the start of the 21st century and we have seen big transformations. Gone are the days of 2G feature phones and almost every person now wants or has a smartphone. Even the sluggish telecom industry has made the leap from 2G to 5G while the auto industry is piloting towards electric mobility and autonomy.

Insurance industry has stayed rather where it has always been. The fact that Lemonade revolutionised this industry or made the idea of getting insurance easier alone deserves credit. This could become the driving factor for it to become one of the biggest insurance companies in the US. In fact, it will be the largest insurtech company.

With a customer base skewing people under 35 years, Lemonade’s approach to its product makes it really appealing. Its model reducing the conflict of interest is one that young insurance buyers will get drawn towards instantly. With its geographical expansion to Europe, the company seems poised to maintain its hyper growth.

In November last year, Lemonade acquired Metromile, a data science company building a smarter, AI-powered auto insurance product. The match was made in AI. Metromile has said that its car-mounted precision sensors have taken over 400 million road trips in recent years. They have covered billions of miles sending real-time data to the Metromile cloud.

This data allows Metromile to cross reference with actual claims data and deliver predictions for losses per mile driven with relative precision. The acquisition will help Lemonade to build its car insurance product called Lemonade car. Lemonade has always been about better pricing, better risk selection, and fairness to consumers.

With Metromile, it can bring those virtues to car insurance as well. One of the bottlenecks could be the risk that comes with such a big change in an industry known to move at a slow pace. The insurance industry may not be innovative but it remains one of the fiercely competitive spaces.

With its stock down 90 per cent from its highs, Lemonade is a classic story of being high risk and possible high reward too. The only question that remains to be answered is whether Lemonade has a path to profitability. Its recent quarter results don’t necessarily hint at one but most of its growth metrics look impressive, nonetheless.

Big Data Expo: the leading event for the big data sector on 14 & 15 september in Utrecht

How Aigents is using AI to become a knowledge and career platform for data science community
August 4, 2022

Radiologists reporting on CT with AI save time and reach higher agreement
August 3, 2022

Previous Post
Cashierless stores are the future of retail and there is now one in Utrecht, thanks to AI and computer vision
Next Post
How South African startup Enlabeler is helping companies in the Netherlands, the US, and Canada with their data labelling needs
Close
This website uses cookies to ensure the best possible experience. By clicking accept, you agree to our use of cookies and similar technologies.
Privacy Policy