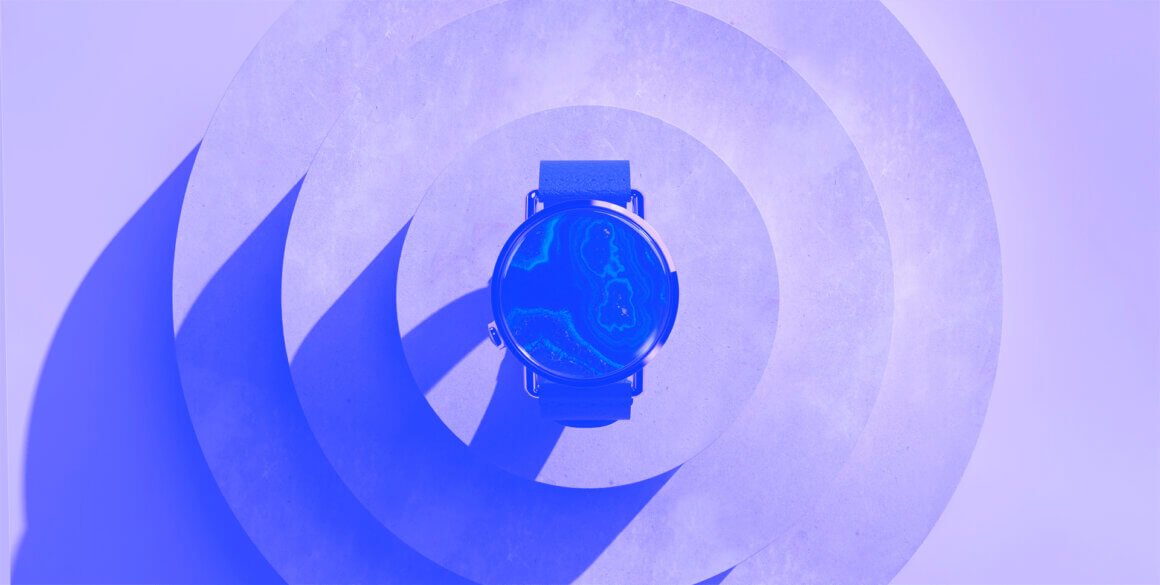 Smartwatches and other wearable devices became one of the major attractions during the pandemic. Earlier this year, Gartner observed that the COVID-19 pandemic played a significant role in adoption of wearable devices.

While wearables come in all forms and shapes, they are all advertised as non-medical fitness devices. The claims are subject to interpretation, but Amsterdam-based NOWATCH wants to redefine smart wearable as an “AWAREABLE” device.

NOWATCH is not a Watch

The raison d’etre of NOWATCH is to offer a device that predicts stress, improves sleep and restores balance in your life without the distractions attached with most wearables. It does so by removing the watch aspect from the wearable.

The NOWATCH looks like any other wrist watch and in fact, the design closely resembles watches from brands like Fossil, Tissot and even some Swiss watchmakers.

It has a stainless steel case that houses another ring-like element made from stainless steel to house the gemstone, which is then protected by a sapphire glass. While the stainless steel casing usually would house an electronic circuit attached to a display on a normal smartwatch, the NOWATCH does away with that altogether. It instead includes replaceable gemstones that aim to be less distracted and also mimics the dial designs offered by some luxury watchmakers.

The stainless steel case has the quick release pin for the watch strap and a ceramic base protected by Gorilla Glass that is home to the main circuit board, skin conductors and more than 40 other components.

This base includes a haptic generator, an antenna and sensors such as an accelerometer, barometer and thermometer. It is a clever design that sits right between a traditional wrist watch and a smartwatch and one that aims to prioritise healthy living.

Since it does not include a screen and thus removes any kind of distraction, NOWATCH says the device is truly capable of being a whole body wellness tool. The creators say they have built the wearable as an “AWAREABLE” device, meaning it respects your body, mind and senses as an integrated whole. It is able to track your heart rate, temperature of your body, blood oxygen, breath rate and movement like most wearables in the market.

It is also capable of recording Cortisol, the main stress hormone responsible for regulation of a wide range of processes throughout the body. It does these measurements and tracking using a smart sensory system developed by Philips Biosensing.

The Biosensing system uses ElectroDermal Activity or skin conductance to interpret stress. NOWATCH says that the high dynamic range of skin conductance provides much more detailed insights into current levels of stress. This can then be used to improve awareness and offer insight into the cognitive zone of users. NOWATCH also comes with an app that tracks your body’s own warning signs and is classified into either an over-stimulated zone, balanced zone or under-stimulated zone. The balanced zone is equivalent to optimal cognitive performance.

The prediction algorithm designed by NOWATCH is also used to offer actionable insights into stress levels and mental stress. In addition to stress, it also monitors the user’s sleep cycles and helps the user optimise their rest and ensure reduced stress when they wake up with its intelligent alarm clock feature.

NOWATCH uses the highest performing sensors including use of an infrared light photoplethysmography (PPG) sensor which uses green light LEDs to reach deeper. This sensor is used to track heart rate, sleep, activity and turn the data into actionable insights. NOWATCH is capable of measuring your heart rate and offers reading in the form of resting HR and live HR.

The wearable designed by Amsterdam-based NOWATCH is also smart because it interprets activity in terms of energy expenditure instead of just numbers or circles to close. The wearable and its algorithm relies on the amount of metabolic calories needed to sustain basal metabolic rate, thermoregulation, digestion as well as physical activity.

It combines heart rate and wrist accelerometer output to offer an accurate estimation of energy expenditure. Another area where NOWATCH differs is measuring temperature. The creators of the wearable explain how regular temperature cannot be measured at the wrist and they use temperature deviation to detect significant differences up from 0.1 degrees celsius.

The temperature sensor also helps keep track of the female cycle. NOWATCH has done at the outset what most companies would do with 2nd or 3rd generation device. It has paired the best sensors available with an AI algorithm that can learn about the wearer over time and detect the smallest change in the length of the cycle.

NOWATCH wants to be a Jewel

For decades, a wrist watch has been more than just a watch. From its origin as a tool in the form of pocket watch, the wrist watch matured to become a jewellery for brands like Cartier, Hermes, Piaget and others.

NOWATCH is bringing that jewellery feel back to the smart wearable segment with its gemstone carving that replaces the screen. There are a total of 8 different gemstone designs available to choose and they are user replaceable and thus customisable.

NOWATCH says each stone is hand-carved by an artisan family in Jaipur, India, led by Azhar Ali. From Malachite, Amethyst to Rose Quartz and Tiger Eye, these gemstones make this wearable standout and also make every piece unique.

NOWATCH says screens add to your stress while these gemstones act as a reminder of your connection to the earth.

NOWATCH is currently being tested by a small number of testers and will start shipping in the spring of 2022. It has reached 447 percent of its funding goal on Indiegogo and is currently offering the limited early bird option at discounted price of €399. This includes the NOWATCH, one gemstone, two straps and a charger. There is also the Gemlover option which offers three gemstones alongside one NOWATCH, two straps and a charger for €677.

The Collector edition will set you back by €999 but it includes one NOWATCH, two straps, one charger and all the eight gemstones. There are only limited units available of all the listings with shipments estimated to begin in March 2022.

If you find your smart wearable’s screen too distracted then NOWATCH is worth checking out.

All stories by : Editorial Staff
You might also like
How Floris Hoogenboom and Schiphol are using artificial intelligence to make the airport autonomous by 2050
May 25, 2022

Previous Post
University of Amsterdam and TU Delft rank among top 20 best computer science institutions in Europe according to CSRankings
Next Post
The 10 key take aways from the WRR report on AI for the Dutch Government
Close
This website uses cookies to ensure the best possible experience. By clicking accept, you agree to our use of cookies and similar technologies.
Privacy Policy