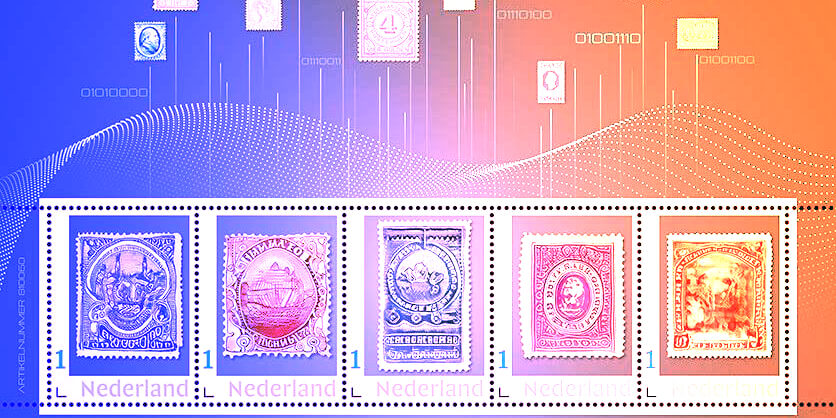 Logistics company PostNL has announced the issuance of a series of stamps designed using artificial intelligence. Artificial Intelligence is widely used in services like digital assistants, screening to robocalls and even to improve detection of lung cancer. However, it is not often the case to see AI being used in the postal industry.

The five unique stamps are for sale in the webshop of PostNL and cost only 4,80 – free delivery included.

From stamps to Digital Art

In a LinkedIn blog post, Tim Ottens, senior data scientist at PostNL explains that while AI, as a term, is thrown around a lot by companies and managers, the initiatives built on top of AI “often get stuck at the level of data analysis and dashboards”. Ottens adds that the idea of issuing stamps designed by AI is an attempt to demonstrate how AI is put into practice at PostNL.

The LinkedIn post also sheds light on how the idea of stamps designed by AI was conceived during the so-called ‘hacking time’. Ottens explains hacking time as part of their time spent on innovative projects, which may not directly relate to their business objectives. The team at PostNL is using this hacking time to discover new technologies and possibilities through experimentation. However, they never took into account how this can lead to new business applications in the long term.

Back in 2018, an artwork designed by AI sold for $400,000 and Ottens drew inspiration from this news to work on AI-designed stamps. He teamed with data engineer Ying Yu where Yu took care of the data and software platform, while Ottens built the design algorithms. Thanks to the AWS cloud environment already used by PostNL, Ottens and Yu were able to build, deploy and iterate on their model.

Ottens further notes that their design models consist of a generating and a discriminating algorithm. The generating algorithm is used to “create something new with somewhat similar characteristics”. This is made possible using existing data such as images, text, time series or chemical compounds. The discriminatory algorithm then determines whether the artificially generated stamp is good enough to pass for the real stamp.

PostNL and its data science ambitions

The issuance of a series of stamps designed by AI is a good example of PostNL’s data science ambitions. The model designed by Ottens and Yu was able to create computer-inverted and approved stamps that were all different but also homogenous. While AI has successfully designed stamps, Ottens notes that the human design process will be able to classify things like a portrait, landscape or a specific object easily. An algorithm, on the other hand, will need thousands of them to make such a distinction.

At the heart of this successful experiment is lots of data, mainly thousands of images of stamps. “Data is the new oil,” says Clive Humby, a British mathematician and data science entrepreneur. In the case of PostNL’s data ambitions, it is evident how the mail, parcel and e-commerce corporation is using data and overcoming challenges along the way.

Ottens explains in his LinkedIn post that like data scientists at most organisations, they also ran into the problem of having enough data of the right quality and plenty of time to train the generating algorithm. The process has taught data scientists at PostNL about visual recognition and how it can be applied at sorting centres. While AI issued stamps is a great example of data scientists leading the charge, this process will make existing mechanisms even more effective.

Ottens and Yu have built a working model that artificially generates stamps that are homogenous. Now, the real challenge is to take the idea to upper management and make it work. PostNL CIO Marcel Krom decided to release the stamps once he heard about the idea while Frank Ferro, Director of Insights supported the initiative. The stamps went on sale on 28th October and from a ‘hacking time’ idea, it has become a normal business project for PostNL.

This is not the only project to come to fruition from hacking time. Ottens says the phishing classification model, which detects suspicious emails on behalf of PostNL, are automatically assessed for harmfulness. With the help of machine learning, PostNL is able to do this automatically and not use security specialists to manually classify emails as ‘phishing or not phishing’.

While PostNL has demonstrated a great example of using existing data and creating a business opportunity with AI, it is knowledge sharing that drives the company forward. Ottens adds that they share the knowledge and experiences from such projects. This includes standards to be used, new techniques and the value of algorithms in “unprecedented circumstances such as a pandemic and lockdown.”

While Artificial Intelligence comes with its own downside, PostNL has effectively demonstrated how it can be used to solve current business problems. The company says AI and data science can be used to make processes and people more effective and efficient, thus elevating the value for its customers.

Another example of AI innovation in the postal industry

Earlier this week, UK-based digital postage stamp company Stamp Free Limited launched its new Digitrack app, an AI-based postal validation and tracking app for carriers. According to the company, the Digitrack app can be downloaded onto an operative’s smartphone or other handheld devices to increase the speed, accuracy and easy handling of mail items that use the Stamp Free Digital Postage Solution that replaces a stamp or barcode labelling with a handwritten code.

“Postal and carrier operatives will have the ability to scan and validate handwritten codes on mail items with the same speed and accuracy as they would conventional barcodes, which will increase the efficiency of the mail sort process. This is made possible by the use of artificial intelligence, which we believe will transform the postal and carrier industry by enabling a truly label-free and contact-free mail and returns journey,” says Hugh Craigie Halkett, Managing Director of Stamp Free.