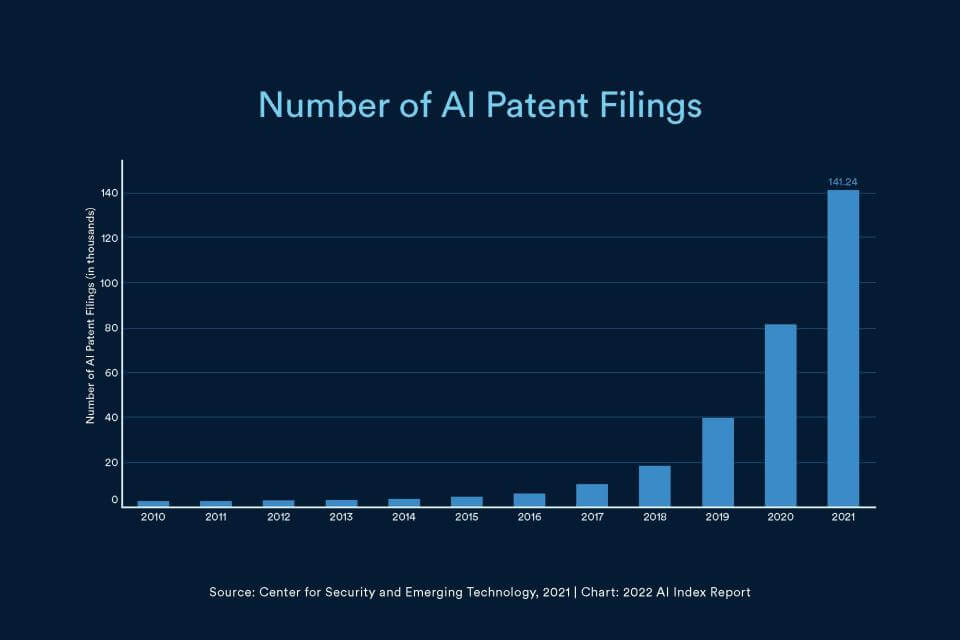 State of AI: These 9 charts show how AI is advancing in terms of research, investment, skills, and legislation

Artificial Intelligence (AI) has evolved to a point that it is now ubiquitously available on our phones and smart speakers inside our homes. While it is easier to see their availability and reach, we need to look at the 2022 AI Index to see its impact and progress. Released by Stanford HAI, the index paints a clear picture of private investment, technical achievements, and key skills in the field of AI.

The annual report, published by an interdisciplinary group of experts from across academia and industry, “tracks, collates, distils, and visualises data” relating to artificial intelligence. The 2022 AI Index report measures and evaluates the rapid rate of AI development. It looks at research and development, technical performance and ethics, economy and education, and AI policy and governance.

The United States is the clear leader in the field of AI but China is not far behind. The US and China are competing toe-to-toe in the field of AI research and development but the US pulls ahead in economy. The state of AI can be well understood through these 9 charts and here is a look.

Machine Learning is the top skill for employers

The State of AI report from Stanford HAI shows that machine learning is the most requested AI skill by employers. Among all job postings in 2021, the share of AI job postings was greatest for machine learning skills at 0.6 per cent followed by artificial intelligence at 0.33 per cent. Neural networks at 0.16 per cent and natural language processing were third and fourth in terms of demand. Robotics rounds out the top five.

AI experts work in the industry

The 2022 AI Index clearly shows that the number of people earning their PhDs in AI has increased dramatically in the past 10 years. However, the majority of these PhD holders are working in the industry while a small fraction are taking up government jobs. As AI becomes more advanced, we could have more of these AI experts join government organisations to set frameworks and help guide the industry.

AI PhD lacks diversity in the US

The report also highlights that the percentage of new Black or African American and Hispanic computing PhDs dropped significantly in the past decade. This trend goes way beyond the digital divide and shows how one of the fastest growing and high paying fields is not accessible to certain groups in the US.

This includes the likes of computer vision, data mining, and natural language processing. This research data closely resonates with the top skills that employers seek right now. Most work in AI is happening in the field of data analytics and computer vision and deep learning thus triumphs over other fields in the broader AI space.

Robots are becoming accessible and affordable

At ai.nl, we have extensively reported on how robotics is being adopted across industries. The 2022 AI Index shows that there is a robot for everyone with robotics becoming affordable and accessible in 2021. The survey shows that the median price of robotic arm has decreased by 46.2 per cent, falling from about $42,000 in 2017 to $22,600 in 2021.

After focusing on technological development and foundational aspects of AI, the AI experts and scholars in the field are focusing on Fairness, Accountability, and Transparency (FAccT). ACM FAccT, an interdisciplinary conference publishing research in algorithmic fairness, accountability, and transparency, is reporting increased interest in these issues across organisations.

Federal lawmakers in the US are finally waking up to the enormous potential of AI and its impact on society. While these lawmakers passed only one bill in 2015, the number of proposed bills has gone up to 130 in 2021. This shows that US policy is showing interest in AI but the number of bills passing both the House and the Senate has not kept pace.

Future of AI: Prediction on 3 ways that businesses will use AI in the future
June 27, 2022

Future of AI: Prediction on 3 ways that businesses will use AI in the future