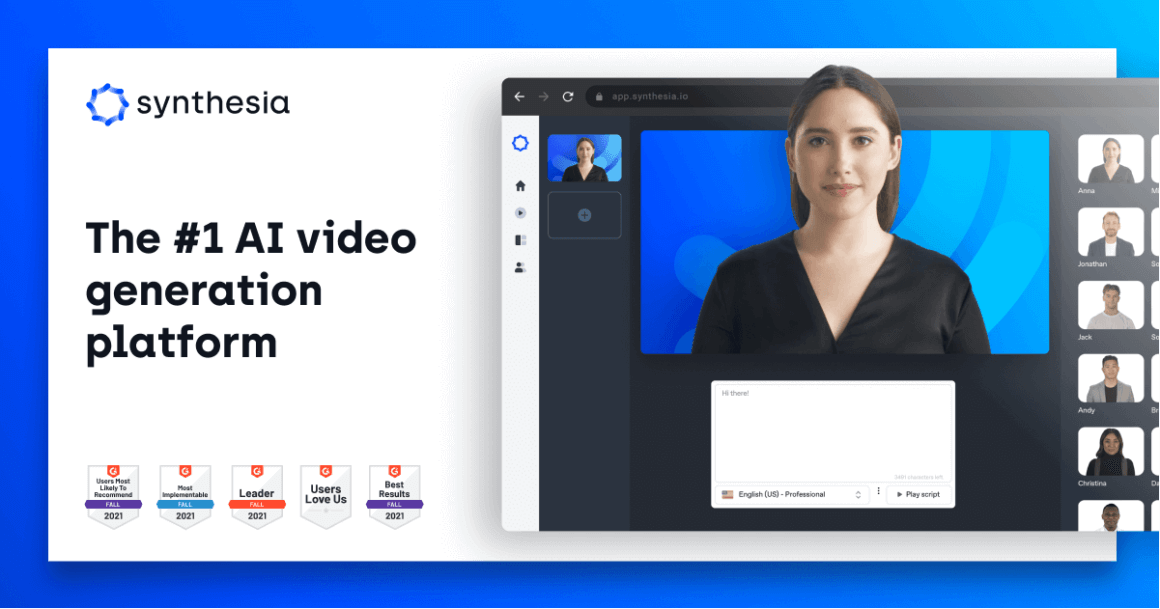 Turning every computer into an AI-powered video production studio: a look at Synthesia’s history, key members, major achievements, and future

In this series of ai.nl, we feature the most promising AI companies in the world: where do they come from, what have they achieved and what are their plans for the future. In this episode, we are looking at Synthesia, a London-based company offering an AI video platform where users can create professional videos simply by entering text.

Video is one of the most powerful tools to communicate in the world. However, it is not easy for everyone to shoot, produce, edit, and upload a video online. In order to do all of those actions, you will need not only skills but also access to devices, and that can be a big deterrent to anyone planning to enter the world of videos.

With AI, Synthesia believes that it can solve this entry barrier by making “video easy for anyone.” With its technology and solution, Synthesia wants everyone to rethink not only about video production but also synthetic media. The company is strongly pushing towards a world where synthetic media is not restricted to being a catch-all term to describe video, images, text, and voice.

Built by AI researchers and entrepreneurs

Synthesia was founded in 2017 by a team of AI researchers and entrepreneurs from UCL, Stanford, TUM, and Cambridge. The company, founded by Lourdes Agapito, Matthias Niessner, Steffen Tjerrild, and Victor Riperbelli, has raised a total of $66.6M so far, according to Crunchbase.

The AI video editor startup has raised funds from investors like Mark Cuban, Kleiner Perkins, Google Ventures, Seedcamp, and Firstmark. The big names in the investors list of Synthesia alone makes it one of those AI startups to keep an eye on. These investors are not only betting on the possibility of a video-first consumption but instead on an internet that will be video-first.

The co-founders of Synthesia want to allow anyone to create or make video content without access to cameras, microphones, or studios. It is using artificial intelligence (AI) to change the process of content creation. The company says that the “ability for AI-driven systems to generate audiovisual content is one of the most exciting developments enabled by recent progress in deep learning.”

In order to create AI avatars, Synthesia simply requires 5 minutes of video and it then applies deep learning to understand and create an avatar. The next step is for the user to edit this avatar using the applicable filters and templates. During its Series B announcement, Synthesia revealed that more than 35 partners at EY now have their avatars.

With focus on accelerating commercialisation and investment in long-term research, the company is building technology that can accurately capture detailed 3D human data at scale. This data will help Synthesia move from front facing AI video creator to a platform capable of creating “full scenes and movies.”

What products does Synthesia offer?

One of the ways that video content is created right now is using softwares from the likes of Apple and Adobe. Synthesia wants to change that and is offering a web-based platform for creating AI videos. It says that with its technology, people will be able to turn their computer into a video production studio.

It is also designed to be extremely simple to use. All one needs to do is subscribe to Synthesia, choose a template and avatar for their video, type the text, add visual elements like images, videos, shapes, soundtracks, and then generate a video in minutes. It is meant to be less labour intensive while at the same time capable of turning text into speech in more than 60 languages and accents.

Synthesia claims to offer over 60 avatars and customers can even add custom avatars. There are also custom backgrounds, audio uploads, background music, and other features like video sharing pages, multi-slide videos, and option to update the content. This flexibility alone makes Synthesia a potent tool for video production.

It is priced at $30 for 10 video credits per month and corporates have their own options. The service is already being used by the likes of Reuters, Teleperformance, Nike, Novo Nordisk, Google, and BBC, among others.

How is Synthesia being used?

Teleperformance says it has saved 5 days per video created by switching from video authoring tools to Synthesia. It has also saved $650 per video and used Synthesia for localisation of the content.

Artificial Intelligence: 10 newsletters that every AI enthusiast must subscribe to stay on top of news and technological developments
May 2, 2022

Artificial Intelligence: 10 newsletters that every AI enthusiast must subscribe to stay on top of news and technological developments

5 best deepfake apps and tools you can check out in 2022: Make sure to use it responsibly and respectfully
April 29, 2022

5 best deepfake apps and tools you can check out in 2022: Make sure to use it responsibly and respectfully