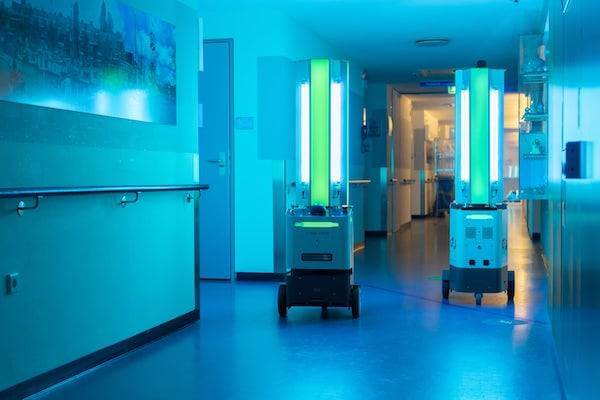 In the AI Startup of the Week, the editorial staff of ai.nl is featuring promising AI startups, their innovations, solutions and challenges. In this fifteenth episode, we are taking a look at Loop Robots, a Dutch AI startup bringing automation to disinfection with the help of smart robots.

At the start of the pandemic, one of the challenges faced by hospitals around the world is not only the large number of patients being infected with COVID-19 but also the need to disinfect the place. We have seen pictures of patients being separated from their family and family members waiting outside to see their relatives recover from the infection.

Loop Robots, a Dutch startup is pioneering the possibility of automating disinfection in hospitals or workplaces with its smart robots. The idea is not just stemming from the arrival of the pandemic but the fact that hospital-acquired infections alone could be reduced with the use of an automated disinfection process.

Automation is solving a number of problems across a number of industries. We have even seen robots-as-a-service becoming a trend in the manufacturing sector, while robots are increasingly sorting your packages at warehouses of big technology retail giants.

If robot vacuums can clean our homes then why can’t robots disinfect a large space like a hospital. At the heart of Loop Robots is the mission to cause societal impact and show real world AI implementation. Co-founded by Aswin Chandarr, Maarten Sluyter, Per Slycke, and Mark Van De Vrede, Loop Robots is an AI and robotics startup based in Delft, The Netherlands.

It builds mobile service robots designed to solve real problems and feature intelligent algorithms packed within affordable hardware platforms. The core technologies of Loop Robots are localisation, navigation, intelligence, and safety. When one of the mobile service robots from Loop Robots disinfects an hospital premises, it doesn’t look like a chore but instead a piece of machinery cleverly working within its abilities and limits.

During episode 4 of OnAir with Remy Gieling, founder of ai.nl, Per Slycke revealed that vulnerable people are most likely to contract infections from various touch surfaces, which he says, accounts for up to 40 per cent of infections in hospitals. With its smart robots, Loop Robots is aiming to lower this transmission of infectious microbes from touch surfaces.

Another area where Loop Robots and its smart robots really make the difference is with the use of chemicals. The human workers doing the cleaning job rely on a lot of chemical disinfectants but Loop Robots relies on SAM-UVC to eliminate pathogens with its disinfection robot.

Cleaning is a repetitive task

Slycke says cleaning or the disinfection activity carried out by hospitals or big office complexes should be seen as repetitive in nature. He says these acts require humans to handle harmful chemicals and disinfectants with the intent of making the premise safer for patients, but they do put themselves at harm’s way by handling those necessary chemicals.

He then adds that even though humans are really good at cleaning surfaces with visible stains, pathogens are not visible to the human eye. Slycke says humans are asked to eliminate something they cannot see with their own eyes and believes the results are also not easy to determine.

The Loop Robots team thus believes that robots are an effective alternative to carry out this repetitive task without any harm to humans and also leave a digital trail of their work. We have even seen a stick vacuum cleaner from Dyson equipped with a laser to detect dirt that is not visible to human eyes and mobile service robots from Loop Robots are equally revolutionary.

How does Loop Robots design its robots?

The first step in the process of designing mobile service robots, Loop Robots says, begins with its technology capable of combining information from multiple sensors to make sure that its “robots always know where they are on a given map.”

The second step is to build the navigation technology necessary to help the robot move around a place. To do this effectively, Loop Robots has built its own map-based technology and the robots use computer vision and AI algorithms to chart a path that will be the best way to reach its destination.

When automation became a possibility for the first time, there was this apprehension around it replacing humans doing their work. Fast forward to 2022, it is abundantly proven that robots are here to augment their human counterparts and not replace them. The same remains true for Loop Robots as well and in fact, Slycke and his team is entirely focussed on building robots for good.

For disinfection, the mobile service robots made by Loop Robots are equipped with UV lamps made by Signify. The intelligence comes from robots being able to scan the room in three dimensions and then determine its own path to optimise and deliver the amount of light needed for all the different surfaces.

“We as humans need to reduce the amount of chemicals and the medication that we use in an unnecessary way,” Slycke told Gieling.

Slycke is leading the charge when it comes to the future of AI driven by data and knowledge. He is also realistic about the challenge of implementing these robots alongside the cleaning personnel in hospitals, but not technology related. Slycke believes the future of AI will depend on how companies focus on the basics and do useful work with the technology.

Klippa automates document processing and workflows with AI
May 26, 2022

Previous Post
From DeskOver to UiPath: a look at UiPath’s history, key members, major achievements, and future of automation
Next Post
Data Science: How JADS MKB Datalab is acting as a bridge between theoretical and practical application in the Netherlands
Close
This website uses cookies to ensure the best possible experience. By clicking accept, you agree to our use of cookies and similar technologies.
Privacy Policy