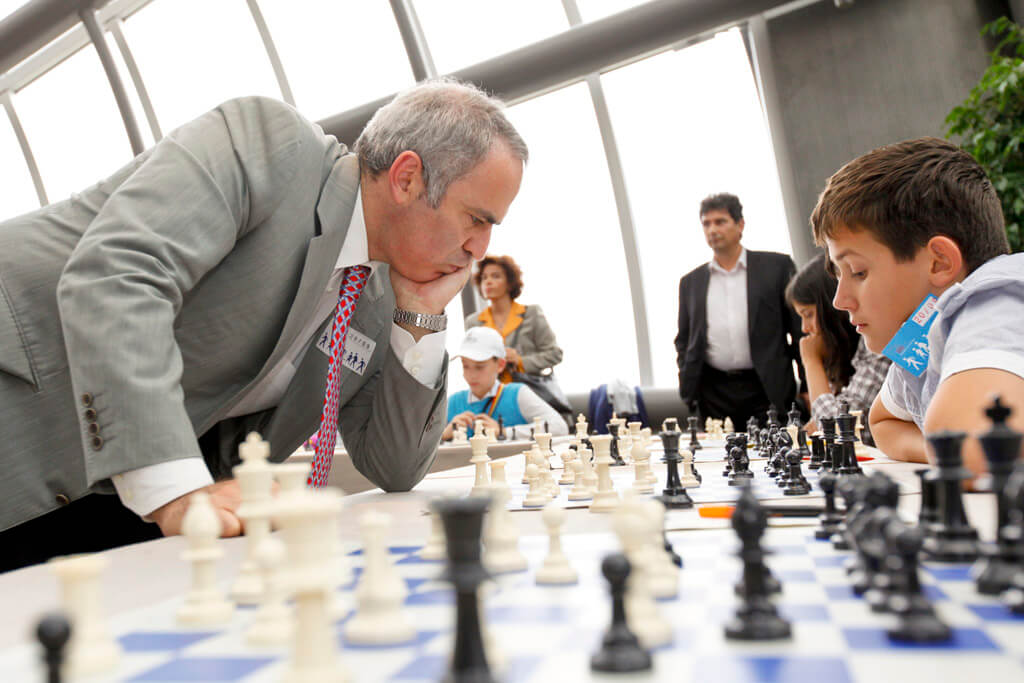 Man vs Machine: Gary Kasparov on getting most out of technology and working with intelligent machines

Gary Kasparov is one of the greatest chess players in history. He not only defeated Anatoly Karpov in 1985 to become World Chess Champion but also defeated computers to show how chess is still a game of humans. In 1985, before playing the championship game against Karpov, Kasparov participated in an exhibition match.

The exhibition match featured 32 of the best chess-playing computers and Kasparov beat them. He was a prodigy in the field and that victory against 32 computers showed his acumen. Kasparov was unchallenged for nearly 12 years and when he faced IBM’s Deep Blue machine, the man was finally challenged.

In his 2017 TED Talk, Kasparov reflects on the challenge and how people have forgotten the events. The first match between Kasparov and IBM’s Deep Blue was held in Philadelphia in 1996 and before you say Deep Blue, it was Kasparov who emerged as the winner. He won that game by 4-2 and a rematch was scheduled in 1997 in New York City.

Within a year, the stakes were turned against the formidable champion of chess. The rematch saw Deep Blue win with a margin of 3½–2½. Kasparov laughs at how people have forgotten the fact that he won the first match. The TED talk is not only a reflection on his famous defeat to a computer but also the history of human versus machine.

Kasparov narrates the story of John Henry, a steel-driving man in the 19th century African American folk legend, who was pitted against a steam-powered hammer bashing a tunnel through mountain rock. Kasparov explains how this narrative begins with John Henry and it has become standard for people to pit humans against machines.

The chess legend makes an important observation: people are not vanishing from the face of the earth because of the onslaught of machine intelligence. He argues that humans should not fear intelligent machines and lower the rhetoric around jobs being killed off or humans engaged in a life or death fight with machines.

Machines are built by humans

Almost twenty years after losing that game to IBM’s Deep Blue, Kasparov says that victory was not just the victory of machines but instead it was also victory of human beings. He is talking about engineers or human creators like Feng-hsiung Hsu, Murray Campbell, Thomas Anantharaman, and Joe Hoane who built Deep Blue.

There are many other computer scientists who played a vital role in the design and development of Deep Blue. Kasparov says the machine’s triumph was a human triumph. He also makes a compelling case for how Deep Blue was victorious but not necessarily intelligent.

As someone who has worked with technology companies, Kasparov has unique insights on machine learning and artificial intelligence. He explains how machines could be trained to play chess by brute force “once hardware got fast enough and algorithms got smart enough.”

He then adds that Deep Blue was intelligent in terms of the output produced and even in terms of the incredible speed of 200 million positions per second. However, the methods used by Deep Blue provide little insights into the mysteries of human intelligence, which is the essence of creating machines that play chess.

Living and working with machines

Machines are no longer the entities that worked in the background or aided the primary work of humans. They are already taking over key functionalities across various industries. Robots are ubiquitous at warehouses operated by delivery companies and will soon be responsible for driving vehicles.

We are also seeing them being used at factories as well as in the hospitality industry for activities like disinfecting floors and surfaces. Kasparov believes we humans tend to focus a lot more on the advancements of these machines and should instead focus on how we “humans feel about living and working with these machines.”

He explains sensing something new and unsettling as soon as he sat across from IBM’s Deep Blue computer. “You might experience a similar feeling the first time you ride in a driverless car or the first time your new computer manager issues an order at work,” he says.

“Human plus machine isn’t the future, it’s the present,” Kasparov says. He says the important thing here is that despite machines becoming intelligent, humans are not losing their value. According to Kasparov, the key for a functioning society will be for humans to learn and work with machines.

Previous Post
Machine Learning Roadmap 2022: what is ML, key processes to solve a ML problem, and tools to build your ML solution
Next Post
Data use case, data assets, and data architecture: BCG explains how to build a data and digital strategy in just ninety days
Close
This website uses cookies to ensure the best possible experience. By clicking accept, you agree to our use of cookies and similar technologies.
Privacy Policy