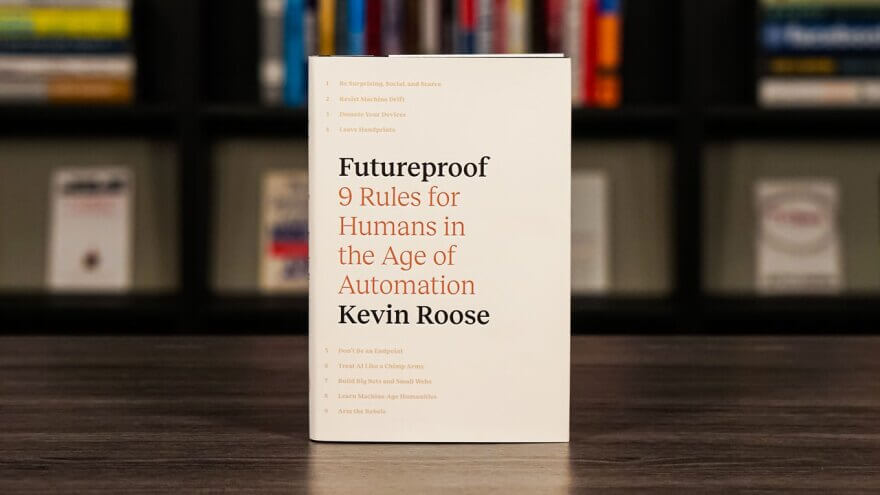 Futureproof: A summary of 9 rules that Kevin Roose recommends to humans in the age of AI and automation

In his third book titled Futureproof, the New York Times technology columnist and author Kevin Roose is tackling an important subject. Roose uses Futureproof not to warn people about the coming attraction of machines taking over for us. Instead, he uses the book to meticulously draft ways that humans can tackle the situation and how they can “Futureproof” themselves.

The book aims to help people understand that the easiest way to lead a good life in the age of AI and automation is by strengthening your own unique skills. Interestingly, Roose also offers nine rules for humans and here is a summary of those rules:

Rule #1: Be Surprising, Social, and Scarce

Roose doesn’t shy away from the fact that AI is better than humans at operating in stable environments where the rules are well-defined and consistent. He says humans, on the other hand, are better at responding to surprises. Whether it is filling in the gaps, or operating in an environment where the rules are not well defined, Roose says humans are better informed or better prepared to compete.

Another area where humans are defined to be better by Roose is meeting social needs. He says humans are social beings and artificial intelligence (AI) is not expected to be social. He further implies that humans will thus be better at having meaningful interactions compared to AI and when it comes to scarcity, Roose says humans will continue to be better at work involving unusual combinations of skills, and thus, better than AI at high-stakes situations.

In our real world, AI is essentially being offered in the form of recommendation engines that powers everything, from the likes of Netflix, Facebook, Instagram, to YouTube, Spotify, and even Roose’s employer, the New York Times. He says that these recommendation engines are essentially powerful machines acting as personal concierges at times and while at other times, they can also be annoying salespeople.

At the end of the day, Roose argues that consumers should continue to stay technically in control of these recommendation engines. He alerts people about how sometimes these machines can push humans into unfriendly suggestions. Roose says humans should stop following autoplay rules and instead take some time to consider the machine’s preferences and understand whether they really match that of their own.

At the onset, the consumer devices that we use daily are meant to help us gain access to information and move ideas. However, these devices have become a central part of our lives and they are so predominant that sometimes we spend more time looking at our phones even when there is room full of people.

Roose strongly recommends humans to demote their devices and thus, not give in to largely invisible forces. “The algorithms that power platforms like Facebook and YouTube are many times more powerful than the technology that sent humans to the moon, or even the technology that allowed us to decode the human genome,” writes Wai Yan.

Roose also argues that humans should stop trying to compete against machines that have vast computing power and says competing with them is conceptually impossible. He thus recommends that humans should refuse to compete on the machines’ terms and focus instead on leaving their own distinctive handprint on the work they do.

He says humans should shift focus from hard work and intensive labour and try to focus on putting their own mark on the final product. He says eventually the amount of work or time spent doing work will become meaningless when AI will be able to do the same task faster.

He even goes on to say that remote workers are at the highest risk of their job being swallowed by automation. He says this is because remote workers cannot display their humanity due to lack of face-to-face interaction. With remote work being two-dimensional, he recommends people to not become endpoints in this economy.

He says most AI is similar to an army of chimps. Roose argues that AI is smart but just not as smart as humans. He says the AI model is capable of following directions but it needs to be properly trained and supervised to achieve the end result. He thus asks humans to treat AI like a chimp army, which is strong, agile and fairly intelligent, but humans need to do their own due diligence before giving control to chimps (AI in this case).

“Big nets are the large-scale programs and policies that soften the blow of sudden employment shocks. Small webs are the informal, local networks that support us during times of hardship,” explains Wai Yan.

Roose says that humans should build skills that are not technical and can be defined as “machine-age humanities.” He says there is a need for humans to learn attention guarding, a practice that helps people get more done with less distraction. He also recommends cultivating Room Reading, the kind of skill that economist Jed Kolko defined as something that doesn’t show up anywhere in a skills inventory. Resting, Analog Ethics, and Consequalism round up the list of machine-age humanities.

The final recommendation from Roose comes in the form of an argument that humans should step into the conversation around AI and automation instead of unplugging from it. He says humans have a moral duty to fight for people and it is not just about fighting against machines. He calls this strategy as “arming the rebels” wherein he is recommending supporting the people fighting for ethics and transparency inside most powerful institutions building future technologies.

Smart algorithm writes poetry that is more popular than the original
June 13, 2022

Smart algorithm writes poetry that is more popular than the original

The Art of AI: How design thinking and prompt cards can improve AI-powered products and services
May 23, 2022

The Art of AI: How design thinking and prompt cards can improve AI-powered products and services

Previous Post
How Tech Rise People is recruiting data science and AI talent for ambitious companies
Next Post
Beyond RPA: IDC’s Future of Work reveals how organisations are broadening automation toolkit with IPA, low-code tools to succeed with their digital transformation journey
Close
This website uses cookies to ensure the best possible experience. By clicking accept, you agree to our use of cookies and similar technologies.
Privacy Policy