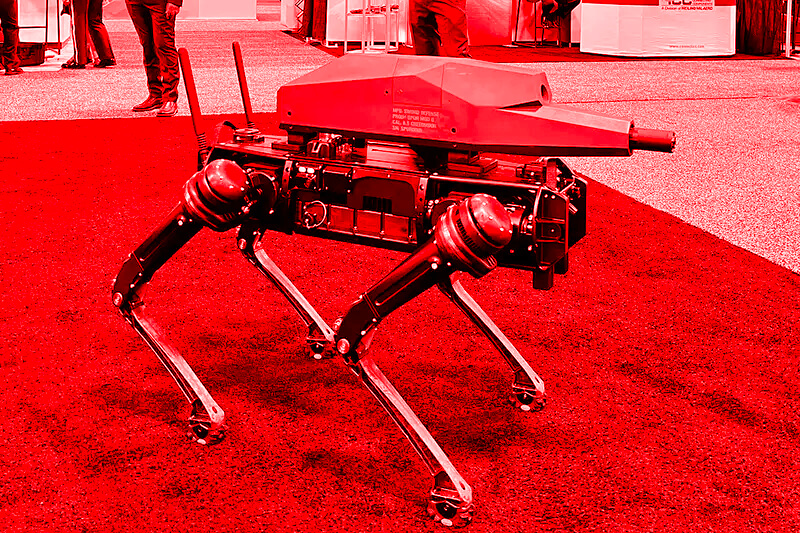 We all know and love the friendly yellow dog-like robot Spot by Boston Dynamics. At the recent World Summit AI in the Beurs van Berlage in Amsterdam it wat the eyecatcher of the show – it did dance tricks and posed proudly with event attendees for selfies (including the ai.nl team). Unfortunately, not all robots are built in such good spirit.

The American company SWORD International now armed a Spot-lookalike by Ghost Robotics with a huge gun, as seen on their Instagram account. They call it a “Special Purpose Unmanned Rifle”. It has a “30x optical zoom, thermal camera for targeting in the dark, and an effective range of 1,200 meters”, according to The Verge.

As the companies website states: “Featuring safe, chamber, clear, and fire capabilities that allows for safe and reliable deployment of the weapon system – providing the operator an ability to load and safe the weapon at a distance. […] Due to its highly capable sensors the SPUR can operate in a magnitude of conditions, both day and night. The SWORD Defense Systems SPUR is the future of unmanned weapon systems, and that future is now.”

The futuristic weaponry was featured at the annual conference of the Association of the United States Army this week. The National Security Commission on AI warned US Congress earlier this year that: “America is not prepared to defend or compete in the AI era”. It also stated that the US has a “responsibly employ AI for national security, and win the broader technology competition for the sake of our prosperity, security, and welfare.”

While the canon (or ‘sniper‘) mounted on the Ghost Robot’s Q-UGVs (Quadrupedal Unmanned Ground Vehicles) is scary, it is not fully automatic. According to ceo Jiren Parikh, it is still controlled by a human operator: “There is a human controlling the weapon, there is no autonomy or AI.”

AI leaders like Elon Musk and organizations like PAX are warning the public for a future with ‘killer robots’. Over 30 countries have committed to a pre-emptive ban on autonomous weapons.